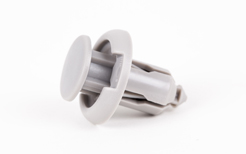 Fasteners are the bedrock of the Nifco group. Fasteners were the key part of the business from its beginnings as Nippon Industrial Fastener Corporation which gave us the name we know today – NIFCO. The business has been developing and supplying thermoplastic fasteners since 1967 and has continued to supply millions, if not billions of these parts since then.

In 1967, Nifco first introduced plastic fasteners to Japan’s automotive production lines. Over the next 50 years, Nifco has contributed, through its creativity based on its originality, and its mastery of technology ranging from mould production, injection moulding, to assembly processes, and has responded to the diverse needs of the market year by year.

There are literally thousands of varieties of fasteners which have been designed and manufactured over the history of the business ranging from panel clips which hold the interior of the car door to the exterior shell, to pipe clips which secure the pipes and tubing which transports fluid around the vehicle – a wide ranging commodity type.

Although the majority of fasteners are still produced in Japan by Nifco Inc, our parent company, fastener production still accounts for a vast proportion of the UK business.

This website uses cookies to improve your experience while you navigate through the website. Out of these, the cookies that are categorized as necessary are stored on your browser as they are essential for the working of basic functionalities of the website. We also use third-party cookies that help us analyze and understand how you use this website. These cookies will be stored in your browser only with your consent. You also have the option to opt-out of these cookies. But opting out of some of these cookies may affect your browsing experience.
Necessary Always Enabled
Necessary cookies are absolutely essential for the website to function properly. These cookies ensure basic functionalities and security features of the website, anonymously.
Functional
Functional cookies help to perform certain functionalities like sharing the content of the website on social media platforms, collect feedbacks, and other third-party features.
Performance
Performance cookies are used to understand and analyze the key performance indexes of the website which helps in delivering a better user experience for the visitors.
Analytics
Analytical cookies are used to understand how visitors interact with the website. These cookies help provide information on metrics the number of visitors, bounce rate, traffic source, etc.
Advertisement
Advertisement cookies are used to provide visitors with relevant ads and marketing campaigns. These cookies track visitors across websites and collect information to provide customized ads.
Others
Other uncategorized cookies are those that are being analyzed and have not been classified into a category as yet.
SAVE & ACCEPT